Today was a downer. Darren woke up every hour last night on his own. When the lumberjack doctor came in he said Darren had another seizure which surprised me because I was there all night. I only slept 3 hours last night. I don’t know how I missed it.
Anyway,  Darren, all of a sudden  got mopey. He said he was done. He wanted to get the leads taken out and he wanted to go home. He refused to eat. We had Psych come and visit with him. They mentioned some depression medication. Those medications usually take four to six weeks to take effect. That won’t do any good.

They asked him what he does for fun. He said volunteer at his son’s school. So while he finished with them I sent an email to the school and when I picked up his son and had cards from the students in his class. Darren smiled for a minute maybe two.

I added some motivation from Zooey Deschanel (sp) 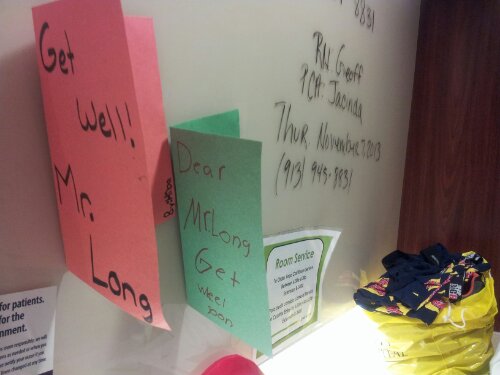 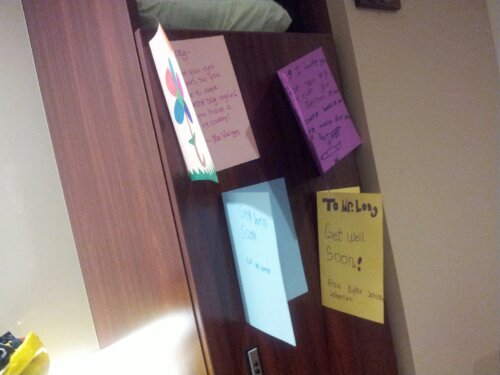 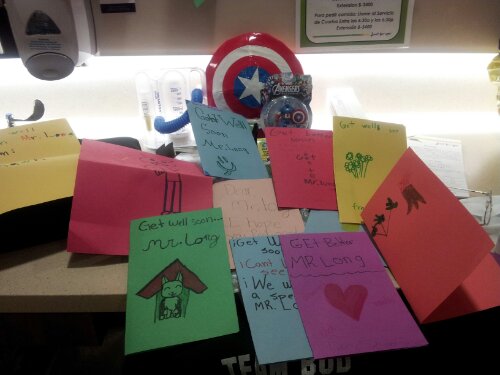 He did get moved out of ICU. His new room has a waiting room in it. Darren has to sleep with the lights on which is something I can’t do. I keep forgetting my eye mask. The spare room is darker and has it’s own TV as well.

Our Team Bud hoodies arrived today too. So we brought Bud his. Thank you to everyone that has sent an ECard. Darren hasn’t received them yet. I hope they arrive tomorrow. If you would like to send one there is a link on his Facebook account, or you can visit the KU Hospital website under the title of Visitors. They told me earlier today they wanted to add some meds that will help him sleep and stimulate his appetite but I was told they didn’t want that because it can interfere with the seizure data.

When I came back Dr Uysal came into the room and said they did not verify the second seizure, but they got excellent data on his one seizure from Tuesday. So Monday Darren will have his second surgery. We don’t know what time yet, but they want to keep moving forward.

Tonight the Nurse gave him that pill that stimulates appetite and helps with sleep.