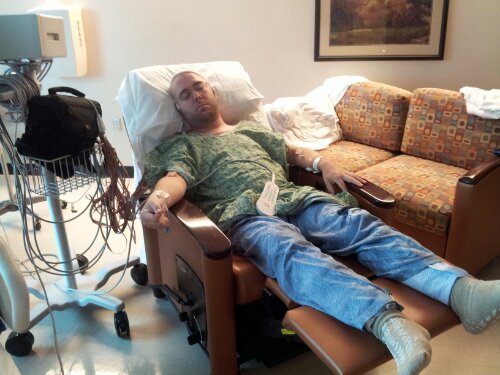 Darren has had an OK day. Nothing too exciting no seizure activity. They only removed the Depakote ER last night. They are going to wait to taper off the Zonegran and Lamictal. They want 4 more seizures but not on the same day.

He moved to the chair today and has been there most of the day.

Oh his MRI was good. No new bleeds.

He has slept most of the day away..he hasn’t had any pain pills since noon. He finally ate some of his special yogurt, but then threw up. He has low sodium count so he has to drink salt water. They tried an Ensure drink But he said it was nasty. He has drank some Gatorade and kept it down.

We just ordered some applesauce and some jello for supper.
He still does not have a room downstairs yet. So his room is still in ICU. 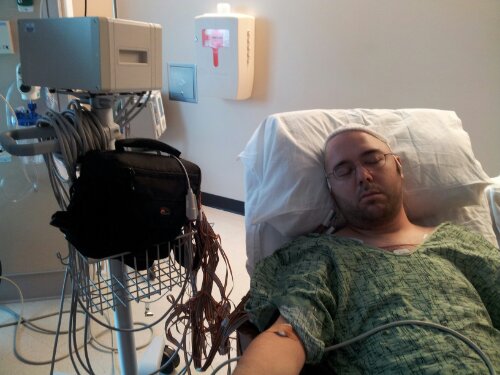 See his magic pole he gets to travel with?
We had a special visit from his Aunt today! Darren was excited about her visit and kept asking me when she was coming.

She took a break from the grandbabies, to get some quiet time and to learn her way around The Plaza. Ha ha ha.
Now for some new pictures of his head. Warning. They aren’t pretty.

Top of his head 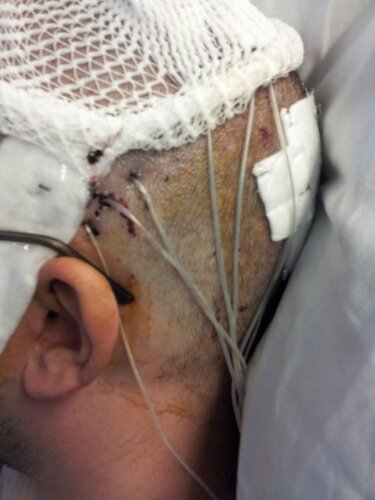 His left side. Still a bit swollen.

I’m gonna stay another night and go home after the doctors come by in the morning.
Bud seemed more awake 30 minutes ago when I decided I was too tired to go home tonight  Maybe we both will sleep tonight.

One thought on “Wednesday already? (by Sherry)”