I will warn you a few of todays pictures are not for the weak of stomach. I got to Darren’s room and they were saying he would get his drain out of his head today. He would also get another CT Scan and he would be completely off his Lamictal and Zonegran.

One of the Neuro Associates came in and tested him by asking her name. She tested him yesterday and he failed miserably. Today she had her name on her “doctor coat” but he failed again. She did return in the afternoon and covered up her name and I heard he remembered!

He saw his Neuro doc and he told us that the neurons are firing up for a seizure, just not enough strength to turn them into seizures. He is to stop drinking caffeinated drinks. Gatorade only and lots of it, he is to do his breathing machine every hour. And he is to keep the leg pumps on at all times.

He ate better today. He ate his burger and threw his lemon tart at the tray.

I brought him more yogurt and his computer and tablet and Kindle. He played some music today. He hardly had the TV on. He also got a bath. He forgot I was there and told me again when we video chatted tonight.

His surgeon said next they would taper the Depakote ER. We’ll see what happens then. So, the surgeon’s associate came in to the room to remove his drain. No numbing medication was given. She cut away his head dressing to reveal his incision and the drain.

Then she covered the drain hole with some gauze and gently pulled it out. 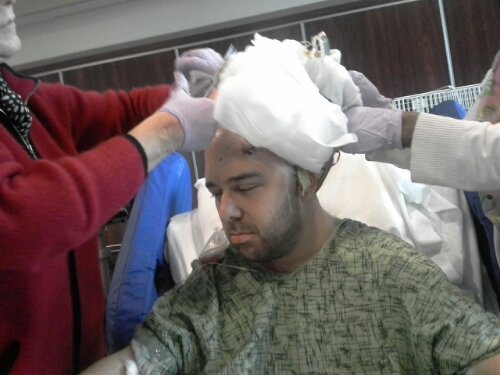 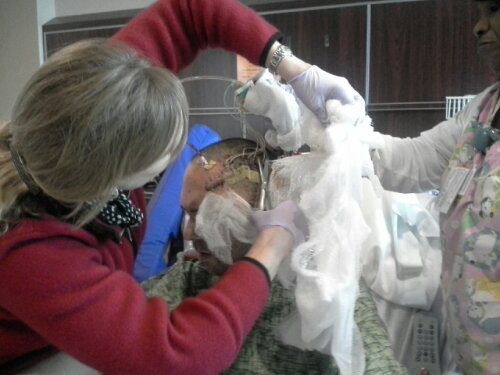