I got to KU Med and Darren’s cousins were visiting. He had just received his hydrocodone and was trying to get relief from his headache. He was sitting in the chair too! They used an alarm on him because he is not to be getting up and walking around by himself. Why they didn’t have this in November?

We learned that the Epilepsy unit now had a pager and they were calling it the Darren Long pager! Too funny! He is famous around the Neurology department for sure!

Darren was moved to the 8th floor which is great news! He had met with Rehab earlier in the day but they had recommended in-patient rehab. Well after moving to the 8th floor, he walked 3 laps and took a shower. He has been eating so the afternoon rehab person said “I think we can talk about out-patient rehab when he gets discharged.” She did recommend a day program but I have not been able to find one nearby our home.

He is still taking high doses of pain med of both pills and in IV. This will have to improve before he comes home.

Darren was surfing the web this afternoon. He read a lot of the comments given on facebook and it is so encouraging for him. I feel bad, but the KU E-cards did not get printed (a long story!). So reading comments on his facebook or blog are great.

He might go home tomorrow (Monday) or Tuesday? We need to get pain in control and get therapies set up. His stitches will be in for 7-10 days. They removed the bandages today. 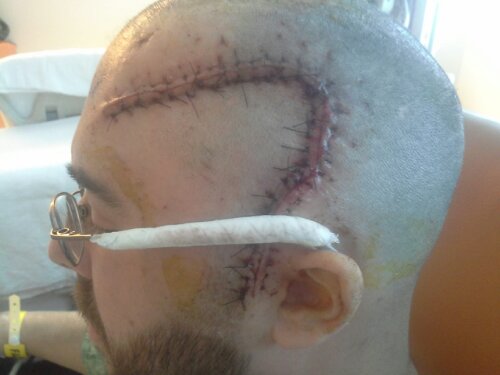 We discussed the scar. His Dad thinks the story should be an alligator bite or shark bite. Darren, before surgery, said “I need a zipper tattooed on it.” Hahahaha!

His neurologist will be by tomorrow.  I hope his son has school so I can get to the hospital early. We are to get another inch of snow tonight and I just heard the plow go by from the inch and a half we got earlier today.