Two Years ago today. This was the day that I was ready and set for the brain to partake in the operation. I wanted to make sure that the Surgeon was going to Tweet me after (or maybe during?) the operation. The message was put on my forehead…

Not much about this entire hospital stay I remember. But I do remember THAT point in time where I had the tweet written onto my forehead.  No one told me what it said, just had the picture taken that I saw later……. 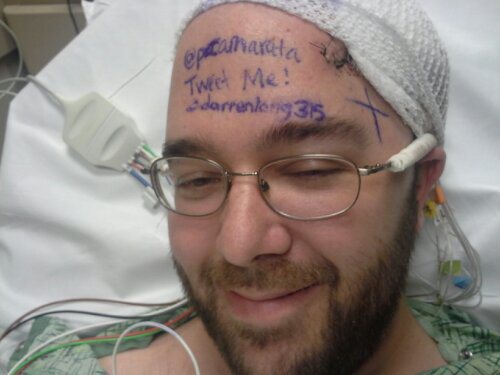 Afterwards, I learned that the Doc wasn’t lucky enough to see the message on my head at surgery time. Someone had already cleaned it off before coming into the room! Doh!

The surgery itself was three hours long. My surgeon said 3cm was removed from the left frontal lobe. I now have only ONE Hippocampus (a regular person has TWO of them, but I only have ONE now). The Hippocampus organizes memories and deals with spatial relation.
…..so my brain just deals the memories that it can reach in the time that I am looking for memories??

I got into my room that night and I was howling in pain!

It was thought that I might be weak on the right side. (FALSE)
It was thought I would have temporary speech issues. (Not really… Just answering slow.)
Missing some eyesight. (FALSE)

Extreme pain most of the night. I was given OXYGEN to help with the pain.

After all of this and up until the day I left, I have VERY VERY few memories of being the hospital. PERSONALLY, I’m thankful that I don’t remember much. LOTS of others have told me otherwise about the experience.