Darren was in the process of being moved to the 8th floor. While moving him he was worried about where his TV was. I heard he took like 3 or 4 bites of oatmeal and that was all. He is still on a sodium drip IV. They gave him a suppository and a little later he tried to go to the restroom in the room. He could not understand why he couldn’t get out of his bed. Darren tried to argue with us. He also started to touch his head dressing which made us nervous.  We were able to get him a bedside commode which was better. He is still swollen on the left side but he was able to open his right eye a bit more.

He continued to sleep…

The nurse came in and gave him a shot of Heparin in his stomach to prevent blood clots.

It took over an hour to get him to decide on lunch and he thought it was supper time. He finally decided on roast turkey with gravy. He ate about half of it. I forced him to eat.

He finally woke up a bit more when his Aunt Tammy came to visit. She stayed about 30 min or so. 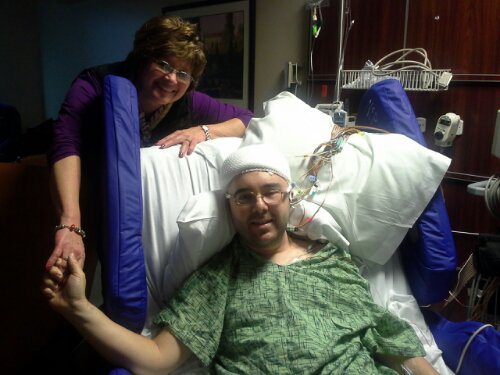 He also ate more of his lactose free yogurt. He ate a whole container! So proud of him!

So keep praying for seizures. He has a Nurses Aide keeping watch while we are gone. If you would like to visit Darren please contact me and we can discuss a good time to come. Also please send him an E-card at the KU Med website and they will print them for him. We need seizures!! He also needs to eat!

Thanks also to the people who have sent gift cards and prepared meals for us.