Our son had school and so I dropped him off and went to Wal-Mart is a few blocks away. I needed to pick up a few things for Darren. I was standing in the Men’s section and it hit me. Everything that had happened these past 20 days. I began to cry right there!

I sucked it up (as my Dad would say) and finished shopping.  I came home and sat down in silence and Thanked God for the staff at KU and for Darren recovery.  Cried again. Then went about my day.

Our son had Parent/Teacher Conference and he is doing well. Despite everything going on at home. Darren has been his Math buddy and so now he thinks he can’t do it without him. So his grade in Math did drop this quarter but it is at a “C” so we are OK with that. We just need to work on it a bit more.

We finally got to see Darren at 6:30 tonight. I took Darren his clothes and toothbrush and stuff. He smiled when we came in. Darren had forgotten we were coming. He said they made him get up at 7am. Then therapies started by 8am. They happened until lunch. He met two other guys and he did therapy with them and he ate all three meals with them. Then we told him about Conferences and he said “I ate all three meals with the same 2 guys.”

“OK” I said. Then his son talked with him. His son left the room to use the bathroom and when he came back, Darren said “Well there he is! What’s up Little Man?” Darren looked at his laptop and looked up at us and said “Well how are you guys? I had a pretty good day, I ate with the same two guys all day.”

I quizzed him on what year it was, and he shooed me away and said he was tired of answering questions. We talked about the Olympics and then he got a really bad headache so the nurse came in and gave him some Tylenol. It did not help. He got really quiet and put his hand on his head. He says his head just hurts on the left side. His swelling is down a lot and when we got there his left eyelid was actually open all the way. As his headache got worse that eyelid began to droop lower than his right.

He treats his laptop like a security blanket. When his headache got worse I offered to put it on the table and he said “No!” and he grabbed it so I wouldn’t take it away.

I gave him a soft kiss and flashed him the sign for “I Love You” he nodded his head. His son said “Sorry your head hurts Daddy. Love you and remember to pray.” (What a sweet kid we have!) 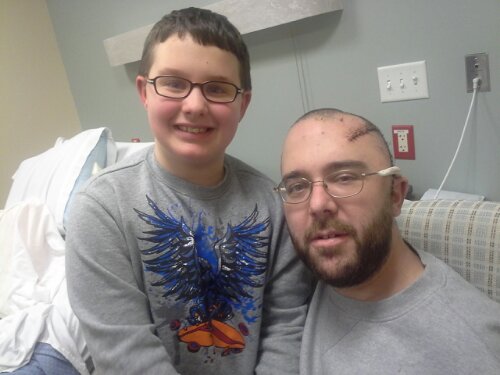