We arrived at Bud’s room to find the lights on and he was smiling when he saw us!!! Everyday when we have come the light have been dimmed and he has been frustrated and grumpy. I think he realizes how close he is to coming home too!!!

I got a text message earlier in the day “I’ve been having fun by arguing and showing that I’m not a bad person.” When I asked him what he was arguing about he replied “I’m tired of hearing this other stuff.” He really dislikes his nurse in the morning and way she wakes him up. He has hidden all the chair and bed alarms. He makes his bed so they don’t put another one in. He checks his bed after his therapy sessions to make sure a new one has not been installed. He took a shower on his own last night, and he was not reminded not to get his head wet. So they made him take another shower today- and I guess he got his head wet again. so he got a mini lecture about it while we were there. I have a shower cap for him to use here at the house- since he does not get his stitches out until Feb 27th.

I brought him Sonic and he ate that down quick!!! We then proceeded to play several rounds of UNO.

Poor guy!!! He won a few a couple of nights ago. But he was laughing and having a good time playing those Draw Two’s and those Draw Four Wilds.

We quizzed him about his day- and he said he biked and did some leg lifts with weights. He thought he baked something but wasn’t sure. He was asked to fix a staff person’s IPAD and update it. He told them “It is an Apple… that is your problem” ha ha ha!!! Still hasn’t lost his humor! Nman quizzed him as well. Darren is quicker in answering questions like “What year is it?” He still doesn’t get it right the first time, but he is not having long lags in his responses. He knows where to find the answer if he is not correct.

Here is his incision as of today. 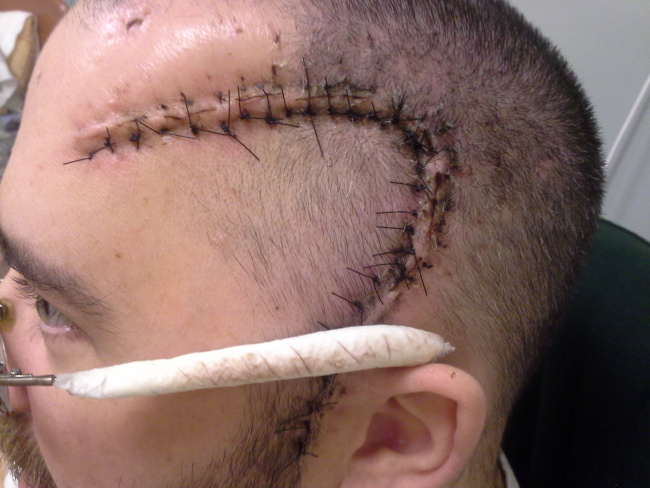 Sexy huh??? He has another week with these stitches.  I think they are keeping them in a bit longer because before- he had some issues when it separated and it is along the same incision as before. We didn’t count the actual number of incisions like we did with the staples though.  Personally, I can’t wait to get that white tape off his glasses!! I want him to get new glasses when this is done.

He was sad we were leaving but it is a school night. Tomorrow night Nman has Scouts tomorrow night so it will just be me Thursday. As we were getting ready to go his parents called.

But if tonight is any clue as to what we have ahead of us- I am happy and thrilled at the healing of this serious surgery. When I was getting texts from him earlier in the week. I was nervous and not sure what would happen when he comes home, but tonight’s visit he was calm, and not in pain and was laughing and he was actually talking and following along with the conversation. We heard the story of the Ipad a few times, but so what! He is remembering things and improving…